Here are some handy tips on the causes of dog fights, how to prevent them and how you can intervene when your pet ends up in a fight.

Dog fights can be very stressful  to both dog owners and their dogs alike, so what should you do when your dog gets in a fight?  Or better still, how do you prevent your dog from getting in a fight? This article will provide you with some handy tips on the causes of dog fights, how to prevent them and how you can intervene when your pet ends up in a fight.

Learn To Read The Body Language Of Your Dog

Before beginning to know how to break up a dog fight, it is best to understand the body language of a dog so one can hopefully prevent the fight from breaking out in the first place. It is your responsibility as pack leader, to ensure that you dog is kept away from other aggressive dogs spoiling for a fight.

As humans we show fear, anger or happiness through body language and a dog will also be able to display visible signs demonstrating their feelings.  Dogs also use body language to communicate with each other.

You will be given plenty of signals by dogs that will show a dog fight is brewing.  As pack leader, you have the ability to stop a fight before it starts if you understand the signals given off by dogs about to fight.

The authority of the pack will always be challenged by a dominant dog so it is very important that your body language shows that you are the pack leader. To understand your dog’s body language will make things safer for both you and your family as well as your dog.

How To Pick Up The Signals

Relaxed dogs who are happy and confident will slowly wag their tails, their ears are pricked up listening while their eyes have no “whites” showing. This body language indicates that all is well with them.

In contrast, aggressive dogs will stiffen their bodies, flatten their ears, lower their heads and narrow their eyes and stare intently.  Their hackles will be raised and growling or snarling might start.

When you observe dogs stiffening their bodies or their tails are straight up, or in a show of dominance, they put their heads over the other dog’s shoulders, don’t start shouting at them to back-off as this is likely to exacerbate the situation.

It is possible to attempt to distract them with treats which might diffuse the tense situation. In a lot of

cases, dogs will simply posture until one of them gives in and backs off and dominance issues are sorted out without a fight.

A dog that is fearful will tuck its tail between its legs and turn away its head, looking scared while trying to avoid making eye contact with the cause of its fear. Predicting behaviour of a scared dog may be difficult as fear makes them unpredictable and possibly dangerous.

Why Do Dogs Fight?

Dog fights break out for a number of reasons often due to natural canine instincts such as:

Another reason for a fight to break out could be caused by redirected aggression which often occurs among dogs living together and who normally get along. This can happen when a dog becomes frustrated because perhaps it can’t reach a strange dog on the other side of the fence so it takes it’s anger out on the next closest target.

Fights among male dogs also tend to break out when female dogs are in the vicinity. It is also very important to be able to distinguish between dogs having a squabble in the dog park and a serious dog fight about to happen.

A squabble can seem serious and be misinterpreted as a serious fight by the owner as during a squabble dogs can move rapidly, snarling and snapping but when left to their own devices, they usually don’t hurt each other or only inflict a few minor wounds.  In this case, it is best to allow noisy dog arguments to sort themselves out as they’ll usually only last a minute or so after which they lose interest and stop the squabble.  Owners or other humans screaming can cause the aggression to accelerate and the fight to become serious.

If a serious fight is about to begin, there will often be no snarling, in fact both dogs may be silent or the dog who is the victim will scream while the aggressive dog will be quiet.  Some dogs latch on and bite down while other could dash in and out, ripping at paws and stomachs.

How to Stop Dog Fights

Solutions for stopping dog fights will not work for all types of dogs every time. It is very unwise to attempt to stop a dog fight without assistance unless you have had past experience in dealing with dog fights.

It is often a natural reaction for an owner to step into the fray by grabbing the dogs by the collar and attempting to pull them apart. This is extremely dangerous as the dogs become single-minded, are in survival-mode and don’t think of you as a loving owner whilst in the middle of a fight.

Children must be kept far away from any dog fights and must never be allowed to get in the middle of the fight as they could get badly injured.  Dogs will not recognize them as family once they are in the fight and could even lash out and bite children in the face.

In fact, it is highly likely that you could get badly bitten in the process.  Should you rush in to separate 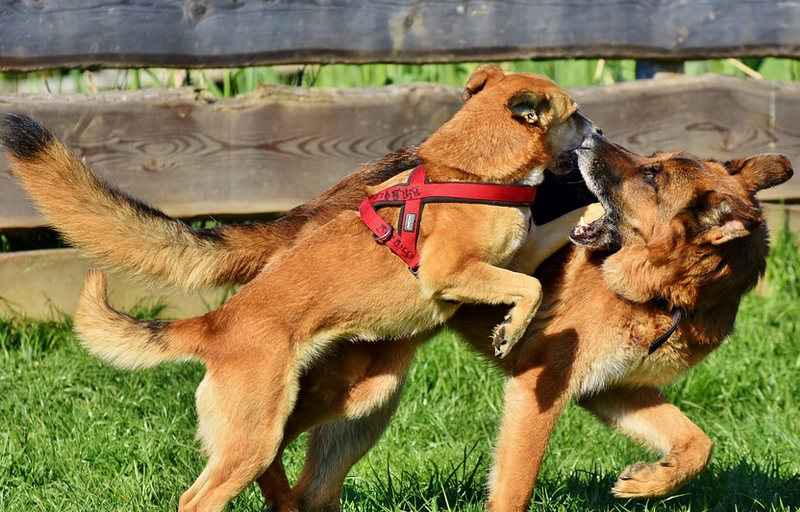 them, while they are in a fight or flight state, they could very well see you as another enemy and bite you as a fight reflex.

Take into account the number of dogs involved in the fight, what breed they are as well as their size and if you care capable of breaking up a dog fight alone without any assistance. The fight has to be broken up very quickly no matter what the reason for the fight starting as a fully fledged dog fight will cause pain as well as injuries and can in some cases even end up being deadly.

The best and of course safest method for attempting to break up a dog fight is for two people to attempt it.  Each dog owner should stand behind his dog, then grab the back legs of the dog which allows it to be lifted up of the ground just like a wheelbarrow.  As their back legs are up, both dogs are now separated.

It is now of utmost importance, not to let the dogs go at this stage as this will result in the fight starting all over again. The two people handling the dogs, must now turn in a circle which allows them to back away and put distance between the two fighters. If this is not done, the dogs may curl back and turn on you and bite you whilst you are holding their legs.

This method of circling the dogs, causes them to sidestep with the front paws or they will end up falling on their jaws.  The best is to circle and back-up so that the fight can neither begin again, nor allow the dogs to attack you.

To prevent the fight starting up again, one of the dogs needs to be secured by locking it in the kennel, yard or garage so that it can’t rush back and start fighting all over again. Do not release the dogs too quickly or they could attack whoever is holding their back legs.

How to Break up a Dog Fight if You are Alone

Should you be alone when a serious dog fight breaks out, don’t waste time shouting at them as this hardly ever works.

How to Use a Break Stick Correctly

As unpleasant as a dog fight can be, we as dog owners need to be prepared for the eventuality that our dog might one day end up in a fight with another dog. If however your dog is the aggressor and attacks other pets then you might have a problem and your animal will have to be retrained and socialized – but that’s another topic we will discuss in another article soon!

We also have interesting articles on flea treatment for dogs and on best family dogs and dogs for kids.

We hope you enjoyed the information on this page and thanks for stopping bye our site – hopefully you will find many interesting pet articles and resources here!